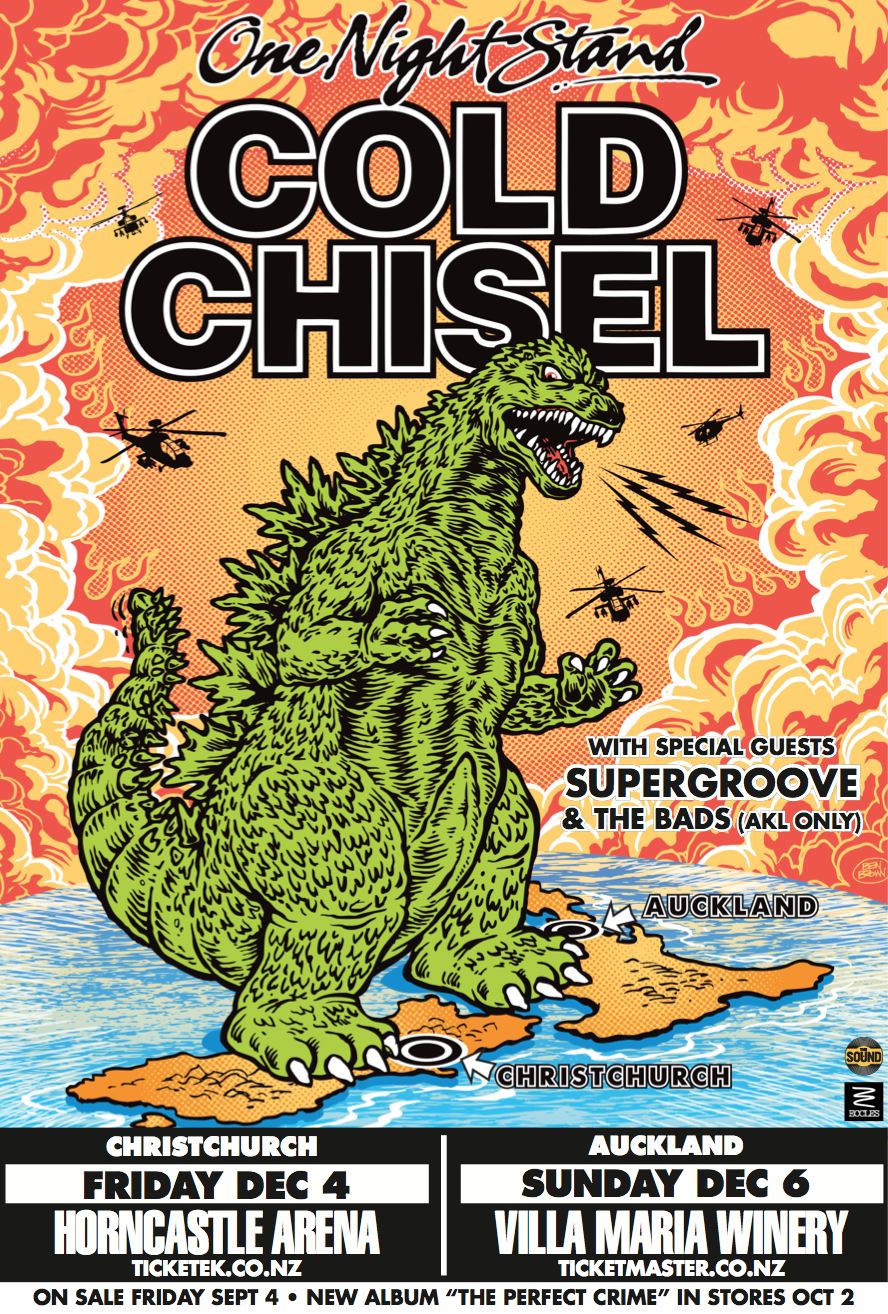 If yesterday wasn’t enough, here we are with some more great Cold Chisel news.

We’re excited to announce that our One Night Stand tour will be visiting New Zealand in December. Our show at the Horncastle Arena, Christchurch on Friday, 4 December will mark the first time we have played the South Island since our Last Stand tour in 1983.  We then travel to Villa Maria Winery for a huge show on Sunday, 6 December.

The last time we were in NZ was 2011 when we played sold out shows at Vector Arena in Auckland and TSB Bank Arena in Wellington.

“New Zealand has always been great to Cold Chisel and we can’t wait to play there on our One Night Stand tour,” said frontman Jimmy Barnes. “I can’t believe it’s 30 years since we last played Christchurch. That’s way too long! And then a huge Auckland show… Bring it on!”

Support act for both NZ shows is the legendary Supergroove!

Supergroove is one of New Zealand’s best-loved live bands. The impressive eight piece ensemble always bring the party. With a catalogue of some of the most iconic kiwi hits including Can’t Get Enough, You’ve Got To Know To Understand and Sittin’ Inside My Head, Supergroove are sure to get the crowd warmed up ahead of Cold Chisel in Christchurch and Auckland.

Opening the evening in Auckland is The Bads. Brett Adams and Dianne Swan have released three albums as The Bads and have toured the globe extensively performing their special blend of folk-country music. They’ve opened for the likes of Lucinda Williams, Emmylou Harris and also collaborated and performed with Cold Chisel’s Don Walker in a series of gigs in recent years.

See below for ticketing information for first access to tickets. 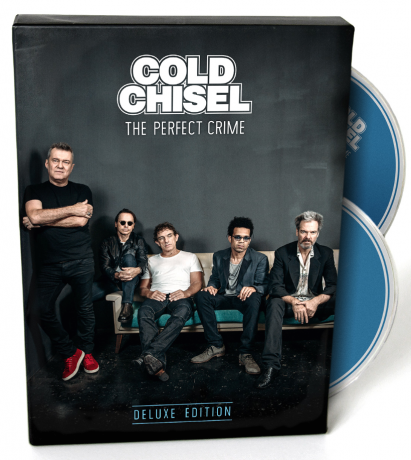 Yesterday, we announced our new studio album The Perfect Crime – to be released on Friday Oct 2. Today we reveal that there’ll be a special Deluxe Edition of the album which will only be available via the Cold Chisel store. It’s a unique version of the album that includes the 15 song CD and a DVD disc that features 10 ‘in-studio’ videos, capturing the band recording The Perfect Crime in Studio 301 and Jimmy’s Freight Train Studio across sessions in mid 2014 and early 2015. The DVD also includes the official video for the album’s first single, ‘Lost’.

The Deluxe Edition features a 56 page booklet that includes the band’s original handwritten lyrics and a great and exclusive series of photos taken during the recording sessions. This special version of the album can only be accessed by via the Cold Chisel Store after clicking on the link attached which will active after 8.30am (Aust East Coast time) today – this link also takes you through to a range of great music retailers:  ColdChisel.lnk.to/PerfectCrime

Members of our mailing list will get exclusive access to tickets for the NZ shows on the One Night Stand tour. All members will be able to buy a maximum of 6 tickets from 12.00pm on Monday 31st August until 12.00pm, Tuesday, 1 September using a special password which will be emailed to them in advance.

Further tickets will be offered to members of the Ticketek and Ticketmaster databases from midday on Wednesday, 2 September until 12.00pm on Thursday, 3 September before a final allocation of seats is offered to the general public at midday on Friday, 4 September. All times mentioned are local times.

NB: To receive the password for the Cold Chisel Database presale you must be signed up for the band’s mailing list before 6.00pm on Sunday, 30 August.

To receive it you must be signed up to the email database.

THE PERFECT CRIME – OUT ON FRIDAY, 2 OCTOBER

With special guests – Supergroove and The Bads