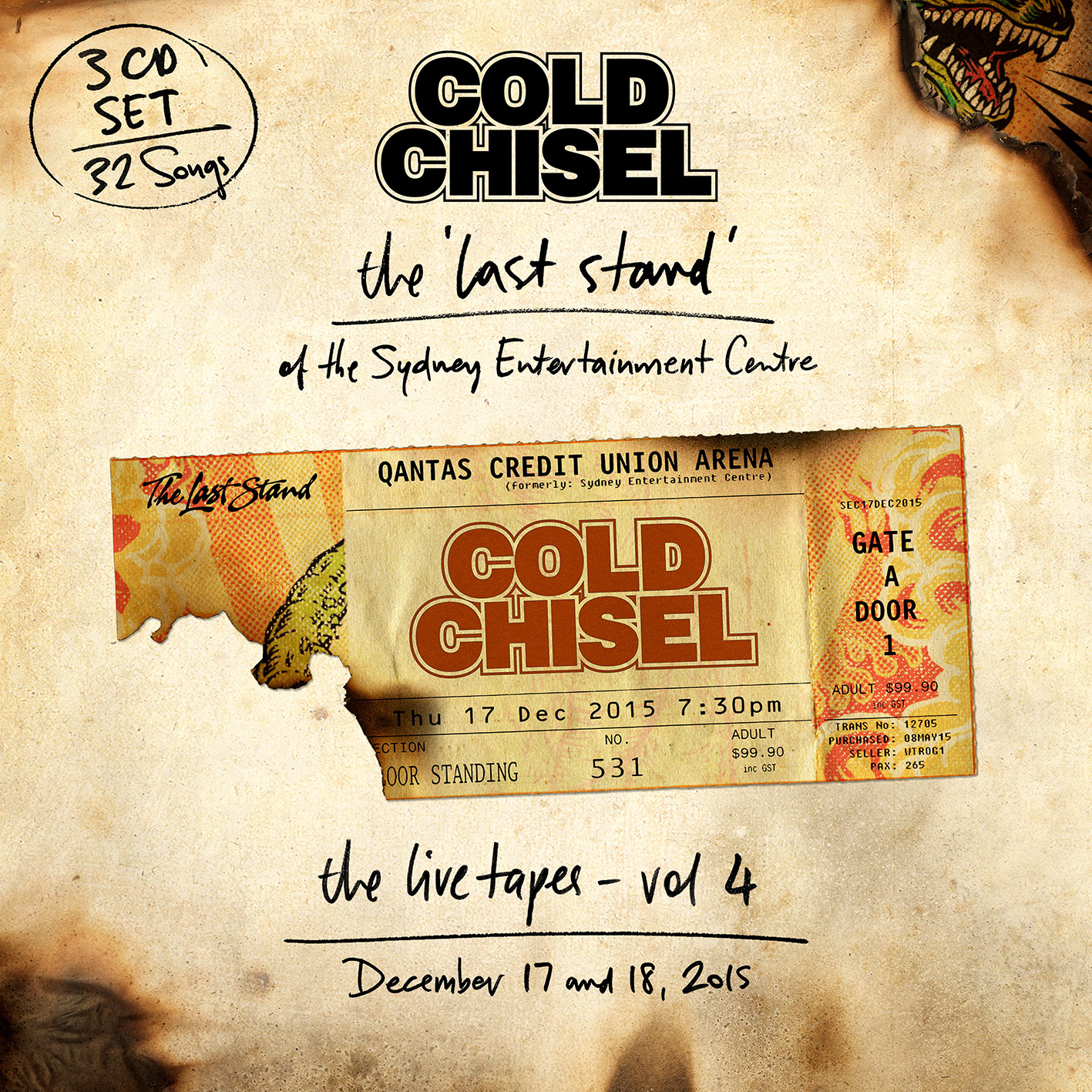 THE ‘LAST STAND’ OF THE SYDNEY ENTERTAINMENT CENTRE

In December 2015, Cold Chisel ended their massive One Night Stand tour with three special shows they dubbed The ‘Last Stand’ of the Sydney Entertainment Centre. These wild, unhinged and emotional shows were played immediately prior to the iconic venue’s demolition. For Cold Chisel it had a double sense of occasion, given that the “Ent Cent” was the venue where Cold Chisel played their legendary farewell shows back in December, 1983 – the band not playing together again for another 15 years.

The announcement of these 2015 shows captured the public’s imagination, selling over 20,000 tickets in 10 minutes, before the band added one more show. Fans who missed out on tickets at the time will now have a chance to hear and see Cold Chisel in all its ragged glory on The ‘Last Stand’ of the Sydney Entertainment Centre – The Live Tapes – Vol 4 as they literally bring down the house. If you were lucky enough to be there, you’ll know what we mean.

In addition to visceral, gut-busting versions of fan favourites like Letter To Alan, Houndog, One Long Day and the Jerry Lee-inspired cover Don’t Let Go, there’s rare appearances of the Chisel classics Ita and Janelle, the new and powerful Lost, Long Dark Road and All Hell Broke Lucy from the band’s critically-hailed 2015 album The Perfect Crime and of course the undeniable anthems Choirgirl, Khe Sanh, When The War Is Over, Flame Trees, Rising Sun, My Baby, Bow River, Standing On The Outside and many more.

Containing over 32 songs – nearly 3 hours of music – The ‘Last Stand’ of the Sydney Entertainment Centre – The Live Tapes – Vol 4 draws its performances from the band’s final two shows on 17 and 18 December, 2015 and is by far the biggest live release ever from Cold Chisel. Renowned as one of Australia’s best-ever live bands, the recording captures Cold Chisel warts-and-all and has then been lovingly mixed by longtime sonic ally Kevin Shirley, with the film version of the release directed and edited by the band’s filmmaking constant, Robert Hambling.

The ‘Last Stand’ of the Sydney Entertainment Centre – The Live Tapes – Vol 4 is available on a number of formats – as a 3CD set, a 4LP Vinyl package and a Ltd Edition Deluxe 3CD/DVD set. The audio is also available as a download and on all streaming services.

And you can still order any format of the album from our store: http://www.coldchiselstore.com.au and go in the draw to win a rare signed poster, a signed vinyl box set and a signed copy of the new album.  Entries close at 5pm today!