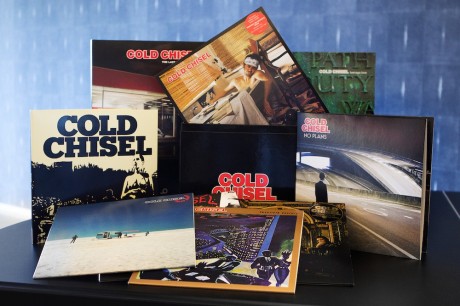 DELUXE BOX SET TO INCLUDE ALL STUDIO ALBUMS

PLUS RARITIES & NEVER BEFORE RELEASED MATERIAL

Cold Chisel have announced the release of a strictly limited edition deluxe vinyl box set to be released on Friday April 10, 2015.

This special box set includes all seven of Cold Chisel’s legendary studio LP’s, two of which (The Last Wave of Summer and No Plans) have never been released on vinyl.  It also contains three other collectibles. Firstly, the rarities album Teenage Love (which has also never been released on vinyl before) and it is compiled here with 6 additional songs that have never been released on any physical format. Secondly, the rare and hugely collectible live EP You’re Thirteen, You’re Beautiful and You’re Mine which has not been available on vinyl since its initial release in 1979. Finally, hardcore followers will appreciate the repressing of the 7-inch single ‘Knockin On Heaven’s Door/The Party’s Over’ that came as a bonus item with the first 10,000 copies of the band’s best selling studio album, East when it was originally released in 1980.

The same deep care and attention to detail that went into the band’s digital reissues in 2011 has gone into this limited edition package. Each album has been mastered especially for vinyl, by the band’s longtime mastering engineer Don Bartley (Benchmark Mastering) using the original analogue tapes. Each disc has been pressed on 180gram audiophile quality vinyl. All of the album sleeves and artwork have been restored to the exact specifications of the original album releases and in the case of the albums that have never been released on vinyl, these have been meticulously prepared and reconfigured for the 12-inch format. The deluxe set is finished off in a custom designed cigarette-style flip top lid box.

This is one for the true believers. 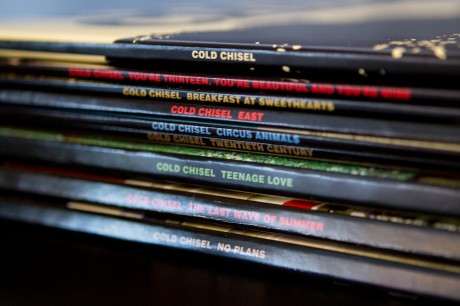 “This project has been in development for 18 months and we are really excited to finally reveal it,” says Cold Chisel guitarist Ian Moss. “When we started out in Adelaide all those years ago, vinyl was the main format for all of our releases. It’s great to have Cold Chisel’s entire studio catalogue available on vinyl and all of it gathered together in this one cool box.”

“I still love listening to music on vinyl,” said the band’s frontman Jimmy Barnes, “so I’m really proud to have all of our work restored and pressed on big, thick state-of-the-art vinyl. This is going straight to the pool room.”

Importantly, Cold Chisel has strictly limited this pressing to only 2,000 copies.

And in a gesture to their loyal fanbase, the first 1,500 people to order the set from the band’s website store will receive an extra never-for-sale LP, Live at St Leonard’s Park 29.05.1978 (also on 180gram vinyl). This famous, much bootlegged 11-song live recording captures the band in wild and dangerous form as they cut through early Chisel favourites like ‘Home and Broken Hearted’ and ‘Khe Sanh’, rarities like ‘F1-11’ and ‘Mona and the Preacher’ and a cover of the classic ‘Georgia On My Mind’.

To ensure you get one of these brilliant limited edition box sets and the live vinyl bootleg album (and have it delivered to your home or office) pre-order the box set today.

Order now from www.coldchiselstore.com.au to receive Live At St Leonards Park 29.05.1978 on 12” vinyl, which will ship to you immediately, one copy for every box set ordered.

Live At St Leonards Park on 12” is exclusive to pre-orders via www.coldchiselstore.com.au, limited to 1500 copies and will never be available in stores.