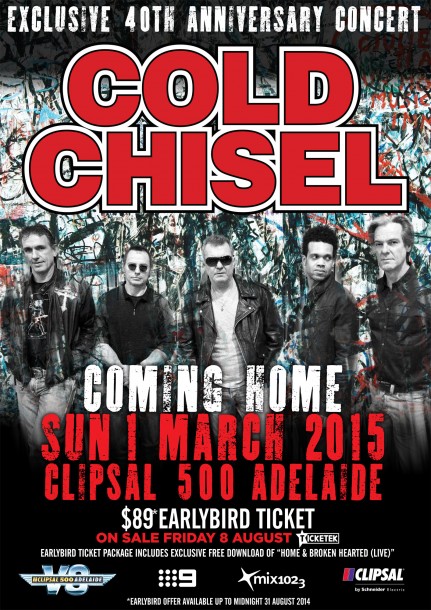 Legendary Australian rock band, Cold Chisel, will return to where it all began to headline the Sunday night concert at the iconic Clipsal 500 Adelaide on 1st March 2015. Marking 40 years since they coalesced into their definitive line-up and tore a rock & roll hole through the heart of Adelaide, the band has decided to celebrate this milestone with a special one-off show for the fans and the city that shaped them.

Cold Chisel receives countless offers to perform but frontman Jimmy Barnes said the Clipsal 500 in Adelaide was the reason for the boys’ homecoming. “It was one of those things where the event really suited the band and the timing was just right – a perfect storm. The Clipsal 500 is the biggest event on the V8 Supercars calendar and the concerts are huge and notorious, so for us it was a great fit, a no-brainer” Barnes said.

Originally formed in Adelaide in 1973, Cold Chisel is one of Australia’s most revered rock outfits with a history that spans forty years and a catalogue of songs and albums that have become part of the nation’s psyche. But it was in 1975 that the band consolidated into its definitive line-up and took the stage for some of the most incendiary performances that South Australian venues like the Largs Pier Hotel have ever seen.

“The Largs Pier days were really exciting for us because we really started to find our feet a bit and figured how to write songs,’’ guitarist Ian Moss said. “We also learned how to deliver a show – a high-energy rock & roll show that builds and finishes with a bang. We watched the crowds grow from week to week. They say the journey is better than the arrival – and that was true.’’

Their reunion in 2009, for a one-off performance at Sydney’s Olympic Stadium, saw the band play in front of 50,000 people. This concert sparked a renewed enthusiasm for working together again – onstage and in the studio – culminating in the Light The Nitro tour in late 2011, the biggest tour ever by an Australian band, and the critically-hailed No Plans album in 2012.

It’s been a long time coming but Adelaide’s favourite sons will return home for one of the most anticipated rock concerts of 2015, a special performance for South Australia courtesy of Australia’s biggest motor race, the Clipsal 500 Adelaide.

A special early bird ticket package will also include an exclusive free download of “Home & Broken Hearted” to be taken from the band’s upcoming release The Live Tapes – Vol 2 – Live at Bombay Rock. This unique offer is available up to midnight 31 August 2014

ON SALE Friday 8 August 9:00am from Ticketek.com.au