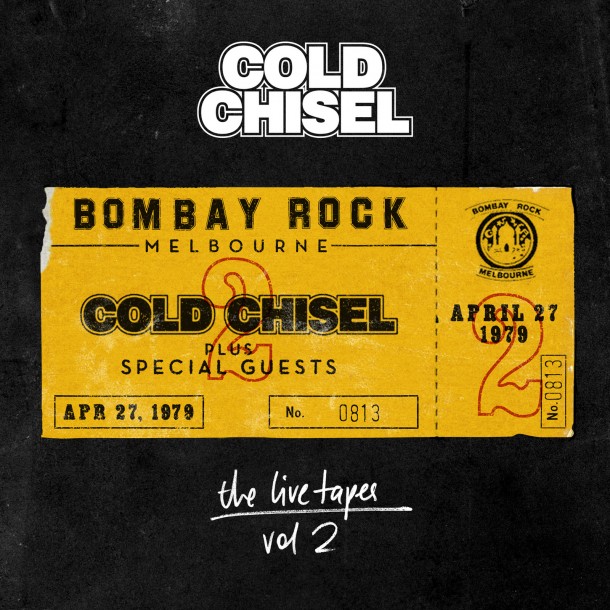 Cold Chisel announce the next installment in their archival ‘Live Tapes’ series, the blistering
The Live Tapes – Vol 2 – Live At The Bombay Rock
Release Date – November 14, 2014

1979: Mad Max premieres, World Series Cricket dominates, Skylab crashes and Cold Chisel do a gig that echoes through the next 4 decades.
Now that much bootlegged show is about to be made available in all its hi-def ragged glory for the very first time.

“The Live Tapes – Vol 2 – Live At The Bombay Rock” will be released on November 14 this year as a CD and digital download. This much requested album is the second in an ongoing series of special live recordings unearthed from Cold Chisel’s own archives.

In 1979 Cold Chisel were yet to have a hit record but they were already forging their legendary live reputation. This particular gig happened on April 29 at Melbourne’s infamous Bombay Rock and some of the show was broadcast live to air throughout Australia on various AM radio stations. It was the first time most listeners had encountered the tsunami of a Cold Chisel gig. For those people the experience was unforgettable and over the decades since that night, tapes, CD burns and MP3’s of the radio broadcast have circulated constantly among hardcore fans.

“The band was in a sweet spot around that time”, recalls piano player and primary songwriter, Don Walker. “Keen and hungry, not yet widely known, but very sharp on the tools.

The gig took place just two months after the release of Cold Chisel’s revered second LP, Breakfast At Sweethearts and features live versions of all but one of that album’s songs. However, the difference between the two sets of recordings is remarkable. Despite the undeniable strengths of the songs on Breakfast At Sweethearts, Cold Chisel has always been dissatisfied with the somewhat restrained and one-dimensional sound of the studio versions.

The Live Tapes – Vol 2 – Live at Bombay Rock recasts the songs from Breakfast… in a whole new light. These newly remixed interpretations capture the ferocious intensity and reckless beauty of Cold Chisel live. From the roundhouse blues of ‘Shipping Steel’ and the dark paranoia of ‘Conversations’ and ‘The Door’ through to the fluid and spare ‘Dresden’ and ‘Plaza’, this is how Breakfast At Sweethearts should have sounded.

First album favourites ‘Home and Broken Hearted’ and ‘One Long Day’ (a freeform 9-minute and perhaps definitive version of this Cold Chisel classic) plus the live standard ‘Wild Thing’ round out a brilliant second installment in the band’s Live Tapes series.

“Over the years, lots of people have said that Cold Chisel are better live than on record”, says Jimmy Barnes. “Well I hope all of those people go out and listen to this album – it’s the version of “Breakfast At Sweethearts” that we should have released in the first place.”

You can pre-order Live Tapes – Vol 2 – Live At The Bombay Rock right now on iTunes, and receive the track ‘Conversations‘ instantly.