Credit Union Arena on December 18, 2015 Cold Chisel have just announced a second show to take place on the night prior … Thursday December 17, 2015.

Cold Chisel initially released an allocation of tickets to their December 18 show to their fan club on Wednesday, followed by a MyTicketek Pre-Sale today. Their response was phenomenal – outstripping any onsale in the band’s history.

A final allocation of Dec. 18 seats still remain for release in tomorrow’s General Public onsale. However, the extraordinary public demand over the last 24 hours has caused the band to get in early and announce this second gig so as to give everyone fair warning and equal access to tickets for this second show.

“It’s blown our minds,” said the band’s guitarist, Ian Moss. “There are so many memories and emotions tied to our ‘Last Stand’ shows for all of us and it looks like a lot of fans feel the same way. We had to add another show, making this a two-night stand,” he laughed.

“We want to give everyone every chance to get the best tickets they can for these shows so that’s why we’re announcing this second show now,” said the band’s bass player Phil Small. “Come and witness the ‘Last Stand’ of this great room.”

Tickets for the new show on THURSDAY DECEMBER 17, 2015 onsale through

Ticketek at 10am AEST Friday May 8

released at this same time. 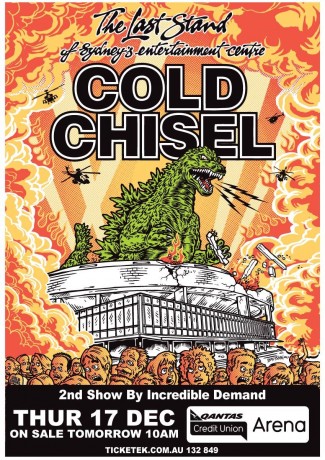