Cold Chisel announce intimate, one off show in Canberra!

COLD CHISEL have announced details of an intimate, ‘one off’ show in Canberra. The band will hit Canberra’s Royal Theatre on Thursday, 26 February, 2015.

Tickets to the Canberra Royal Theatre warm up show will go on sale to the general public at 10.00am on Tuesday, 3 February with an exclusive pre-sale available  to member of the band’s mailing-list  from 10:00am on Monday, 2.

This date at ‘The Royal’ will be COLD CHISEL’S first Australian show in nearly 3 years and their first ACT visit since their sold out show at the – much bigger – AIS in 2011.

“There’s a great energy about really seeing the whites of people’s eyes at gigs like this”, says the band’s frontman, Jimmy Barnes.

You can expect the Royal Theatre setlist will be one of the longest yet with the band likely to try out some new tunes as well as classics like Khe Sanh, Bow River, You Got Nothin’ I Want, My Baby, Forever Now and Flame Trees. 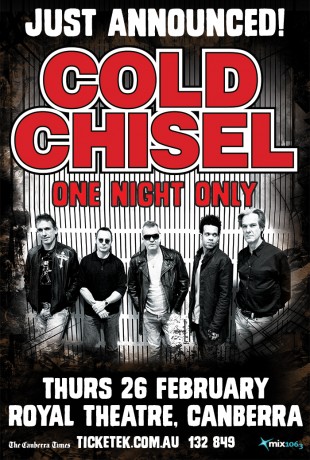