The Barking Spiders, announce a special one-off gig in Sydney on Saturday, 28 December 2019.

Notorious mystery band, The Barking Spiders, have announced a special one-off gig at The Factory Theatre in Sydney’s Marrickville on Saturday, 28 December 2019.

Tickets go on sale at 9.00am tomorrow, Friday 6 December.

Some will be available online via Ticketek while the remaining tickets will all be bundled with special editions of Cold Chisel’s new CD, Blood Moon, in four Sydney music shops for those who get in fast.

Red Eye Records and Utopia Records in the city will each have some tickets as will Hum Music in King Street, Newtown and Beatdisc Records in Parramatta. These stocks are expected to sell out quickly so fans are strongly advised to be standing on the outside when the doors of these stores open to give themselves the best chance of attending this rare performance. 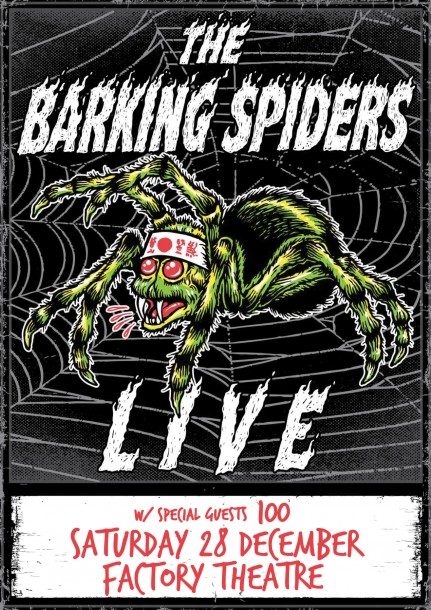 The Barking Spiders myth and legend has grown deeper and darker over the years, despite the fact that the band has never entered a recording studio. Preferring to play small, semi-secret shows their one and only album – The Barking Spiders Live 1983 – has gone on to be hailed as an Australian classic.

Pundits have rumoured that The Barking Spiders are actually a famous band who originated in Adelaide in the 1970s but these rumours have never been confirmed. Both bands have consistently maintained a strict ‘no comment’ policy on this sensitive topic.

This web of insectival intrigue will likely be woven further at the intimate Factory Theatre on Saturday, 28 December 2019.

The Barking Spiders will be supported by Sydney post-punk outfit, 100, who have signed binding NDA agreements, preventing them from making any comment.