RINGSIDE – ON VINYL FOR FIRST TIME 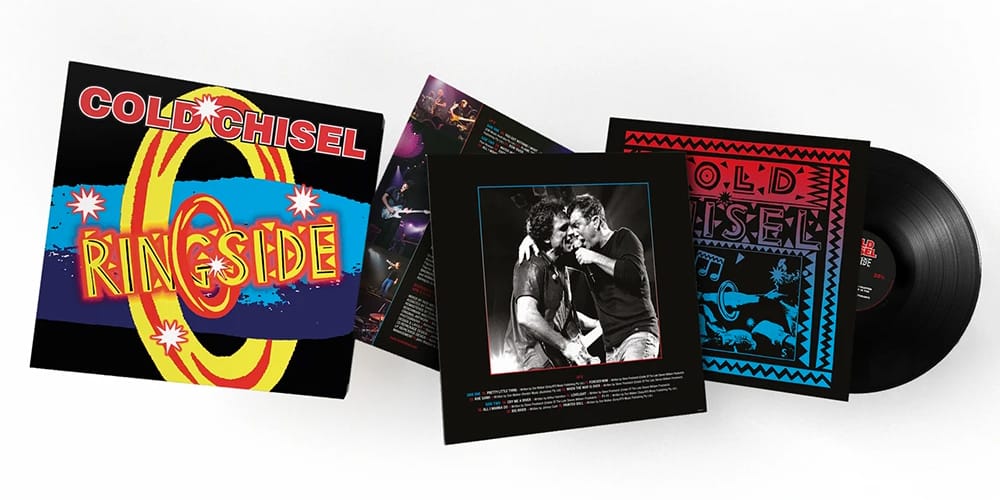 The intimate live album reissued on Vinyl for first time ever.

Cold Chisel have announced that on Friday, 26 November they are releasing their acclaimed live album Ringside on vinyl for the first time ever. The band is also releasing a new, Deluxe 2CD/DVD edition of this unique release.

Partly inspired by Elvis Presley’s legendary 1968 ‘comeback’ special and more simply by a desire to perform in a smaller, more intimate environment, Ringside captures the iconic Cold Chisel up close and personal, like they’re performing in your lounge room. Recorded across 4 shows in June 2003 (and originally released in November 2003), Ringside turns the normal Cold Chisel concert experience on its head. With a rotating stage set in the middle of Sydney’s Hordern Pavilion, no member of the audience was more than 30 metres from the band and everyone got to see the five piece outfit from every imaginable angle. The Hordern is much smaller than the band’s normal arena or outdoor shows and with the stage placed in the middle of the room it reduced capacity and further accentuated just how intimate Ringside was.

In addition, Cold Chisel upended their setlist, playing rarely heard gems like Plaza, Rosaline, Pretty Little Thing and F-111, as well as unveiling three totally new songs – two Steve Prestwich penned and sung tracks, Lovelight and All I Wanna Do (which features on Ringside twice, once sung by Prestwich, and from another night sung by Barnes), and Fallen Angel, written and sung by Don Walker, which ultimately ended up on Walker’s solo album, Cutting Back. The album is also unique for its covers – Johnny Cash’s Big River, Arthur Hamilton’s torch song Cry Me A River (made famous by Julie London) and Sunshine, written by Don Walker’s friend Paul Hewson and originally recorded by Dragon – all of which only ever appeared on Ringside.

The band recorded these shows in June and released Ringside as a double CD in November 2003 and then undertook a national Ringside tour across the nation in November/December 2003 and January 2004. “We loved playing those shows,” recalls frontman Jimmy Barnes. “I remember the band had a real swing about it. And it was great mixing up the set list, playing some obscure tracks and covers like ‘Big River’ and ‘Sunshine’.”

In addition to the vinyl release, the band is also releasing a limited edition Deluxe set, combining the double CD with the normally separate DVD. The Deluxe package features new cover art. “When our management started digging into the archive for ‘Ringside’, they lucked upon a design that we did for these shows,” says Don Walker. “It was an image created by Carl Bellesini from Love Police and it captured the romance of the travelling tent boxing shows, back at the start of last century. It’s a different take on the original artwork, which is still represented on the vinyl release and was designed by the brilliant pop artist, Martin Sharp. This new and ‘lost’ artwork also caught the spirit of what we were attempting to do with the shows – and we all thought it would be good to switch it up.”

The Ringside DVD was directed by Robert Hambling, Cold Chisel’s long time film documentarian, and for all those who didn’t get to see one of these unique shows, the DVD is the next best thing to being there.

Side One
1. Home And Broken Hearted
2. The Things I Love In You
3. Rosaline
4. Breakfast At Sweethearts
5. Plaza