COLD CHISEL SET FIRE TO THE CHARTS, THE NEWSTAND… THE TOWN 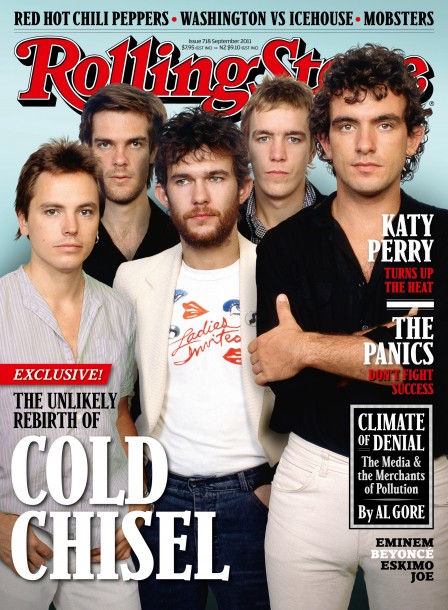 It promises to be a huge week for the legendary Cold Chisel, with their “Light The Nitro” tour going on sale at 9am this Thursday. However, the good news is already rolling in for the band.

Last night, more than 33 years after its initial release, their classic song Khe Sanh made the national Top 40 for the first time ever.  For a song that was banned on commercial radio when it was first released, this week’s appearance on the ARIA Singles Chart follows the recent digital release of Cold Chisel’s remastered catalogue which also propelled Flame Trees, Cheap Wine and When The War Is Over back into the charts.

And in what is almost certainly a first for an Australian band, Cold Chisel have no less than nine albums in this week’s ARIA Top 100 Album Chart. East has actually gone back into the Top 20 more than 30 years after its release. Every one of the band’s six studio albums made the list as did three of the group’s live titles – Swingshift, Ringside and The Last Stand. In fact, leading music retailer JB Hi Fi had nine Cold Chisel albums in their Top 40!

The commercial success of the band’s re-releases has been matched by an overwhelming critical response:

On Wednesday, the band will also grace the hallowed cover of Rolling Stone magazine with an in-depth interview with the band, talking about the background for the reissues and their upcoming national tour.

It will also bring a smile to the dials of Cold Chisel fans to learn that Jimmy Barnes continues to recover well from some recent illness. He has no heart problem, has not been hospitalised and is preparing to be in top shape for the commencement of Cold Chisel tour rehearsals in September.

Tickets for Cold Chisel’s Light The Nitro tour go on sale to the General Public at 9am this Thursday 4 August. More details are on the tour page.