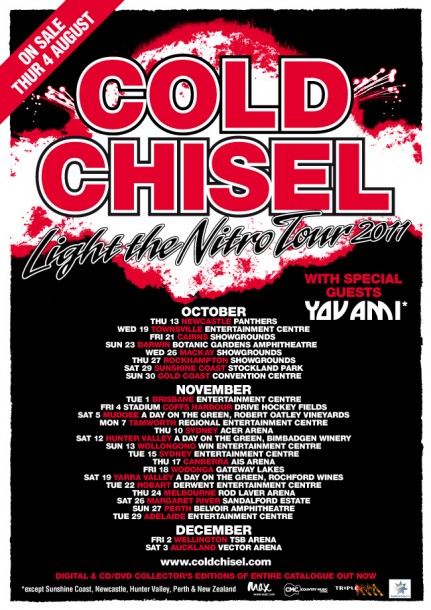 COLD CHISEL ARE BACK!

The Light The Nitro Tour will kick off in October and finish on the first weekend of December with 24 concerts unveiled around Australia plus two New Zealand shows.

Tickets for all these gigs will go onsale everywhere at 9.00am on Thursday, 4 August.  However, anybody who signs up to the band’s mailing list at HERE before August 1 will actually be able to buy tickets from 9.00am on Tuesday, 2 August as part of a special presale.

The Light The Nitro Tour will take this legendary live band from Darwin to Hobart and from Coffs Harbour to the Margaret River. In addition to all capital cities, the tour will hit six key Queensland regional centres plus other hubs such as Mudgee, Wodonga, Tamworth and the Hunter and Yarra Valleys. Cold Chisel will wrap up the Australian leg of their tour in the town where they first formed – Adelaide. Then they’ll cross the Tasman for shows in Wellington and Auckland: their first NZ gigs since 1983.

Shows will be staged under specially constructed all-weather Big Top Tents in many towns. There will also be seated arena shows, amphitheatre dates, a club gig in Newcastle and for the first time ever the band will play a handful of very special winery concerts.

Apart from the winery experiences, every ticket for every concert will cost only $99.90 (including all booking fees but excluding any credit card charges and ticketing agency transaction charges).

“We can’t wait to get back on the road together“, said frontman, Jimmy Barnes. “Every day for years I’ve had at least one person come up and ask me when Cold Chisel are going to do a proper tour. I’m bloody glad to finally have something good to tell ’em!”

The tour announcement comes on a day that is already a huge one for Cold Chisel fans.

At exactly the same time as the concerts were being announced at a Sydney press conference, all of the band’s recordings were being unleashed digitally for the first time in a major online launch that included 56 rare and previously unreleased tracks. Meanwhile retailers were receiving the newly remastered and repackaged CD versions of all the classic Cold Chisel albums which are in store now (each of their studio albums now comes with a bonus DVD containing rare and unreleased footage from that era).

This massive catalogue rollout had already been hailed as the most extensive archival project in the history of Australian rock. Today’s timely tour announcement should help focus even more attention on these special releases.

Jimmy Barnes revealed today that the original plans for all of this were actually hatched in secret nearly two years ago around the group’s memorable one-off show to over 50,000 people at Sydney’s Olympic Stadium.

“We got such a buzz from that gig that it made all of us really want to get our act together”, he explains. “We wanted to do things properly though because we know this band means a lot to a lot of people – especially us! So we had to do it right. That meant taking time to find lots of cool unreleased stuff and getting the albums looking and sounding great. It also meant making all the music available everywhere that people might want to get it these days. We agreed that once that was sorted we’d go out and play all those songs right around Australia and New Zealand in a way that we haven’t really done since the early 80s.”

These plans took the better part of two painstaking years to pull together including lengthy archival excavation and remastering activities. However, in January this year everything was suddenly put on hold with the tragic passing of the group’s drummer, Steve Prestwich.

Keyboardist Don Walker explains that for two months nobody in the band even discussed whether to continue what they’d all been planning together. “When the four of us finally sat down to talk about it we realised we all felt the same way. Steve was really keen on seeing all these things happen. We all felt it would have been wrong to just walk away from the plans we’d started together.”

“At one point we actually thought about calling the tour ‘Unfinished Business’,” explains bassist Phil Small. “After that 2009 gig we’d all quietly decided to try to do something big. To have bailed out just a few months from actually doing it would actually have felt like we were letting Steve down.”

As guitarist Ian Moss explains, “It was all another reminder that life is short and you never know what’s around the corner. We miss our brother Steve every single day but the four of us still love playing music together. And we know that people want to hear these songs, so we want to do more of that while we still can. The tour is going to be a celebration of what he helped us create.”

Renowned drummer Charley Drayton (Keith Richards, B52’s, Divinyls) will be behind the kit for the Light The Nitro Tour and one fifth of tour profits will go to Steve Prestwich’s children.

The tour name refers to the practice of injecting nitrous oxide into the carburettor during a street race, which instantly doubles or triples the horsepower of a conventional engine. Incredible power, explosively unpredictable … obviously apt for this incendiary live band.

Hardcore fans may be interested to know that “light the nitro” is also a line from one of the songs the band recorded over recent months … a new Don Walker rocker called HQ454 Monroe about a man and his beloved hotrod.

Cold Chisel have promised to showcase “one or two” new tunes on the Light The Nitro Tour. The setlist will also feature more than 20 of their classic songs. While Cold Chisel are continuing to make progress on new recordings – including some songs written by Steve Prestwich and some featuring his performances – there will be no new album released for this tour. At this stage a release is pencilled for early 2012.

For the rest of 2011 the group will be focusing totally on supporting their massive catalogue re-release with the biggest Australian concert event of the year … the Light The Nitro Tour.

Joining Cold Chisel for all but seven of these shows will be special guests You Am I. The group’s singer, Tim Rogers, is a lifelong fan of Cold Chisel and actually joined a disparate group of luminary Australians including Ita Buttrose, John Birmingham and Midnight Oil’s Jim Moginie in penning liner notes for one of the new CD reissues.

“There are wildly vacillating expectations racing round my head,” says You Am I‘s Tim Rogers. “Cold Chisel are the real deal: they’ve climbed the mountain, drained the ocean, extracted the gold and the poison. We’re engorged with pleasure to be asked to support them, and will be alternately brattish, reverential, charming, barbaric and hushed. Like all good little acolytes should.”

You Am I‘s shoes will be filled on the Sunshine Coast only by special guests, Grinspoon.

Dan Sultan, Stonefield and Even will also appear on various dates and further opening artists will be announced over coming months.

The basic facts of Cold Chisel‘s career need no retelling. Since their initial heyday in the late 70s and early 80s their music has been embraced by subsequent generations as shown just last week by the appearance of two of their albums in a new Triple J listener poll of Australia’s 100 greatest albums of all time. Hearing their classic album East played in full on the national youth broadcaster 31 years after it caused the band to trash the set at the Countdown Awards is testament to their special place in our musical landscape.

Khe Sanh, Flame Trees, Bow River, My Baby, You Got Nothing I Want, Last Wave Of Summer, Forever Now, Cheap Wine, Choir Girl, Standing On The Outside, Rising Sun, Saturday Night … and many more.

So many great songs. One great band.

Seeing is believing – so don’t miss your chance to experience the legendary Cold Chisel live.

Dates and venues for the Light The Nitro Tour are below.  Presales from 9am on Tuesday, 2 August with General Public Onsale from 9.00am on Thursday, 4 August.

The tour will be presented nationally by Triple M and Southern Cross Media, MAX and CMC

For full tour dates check out the tour page