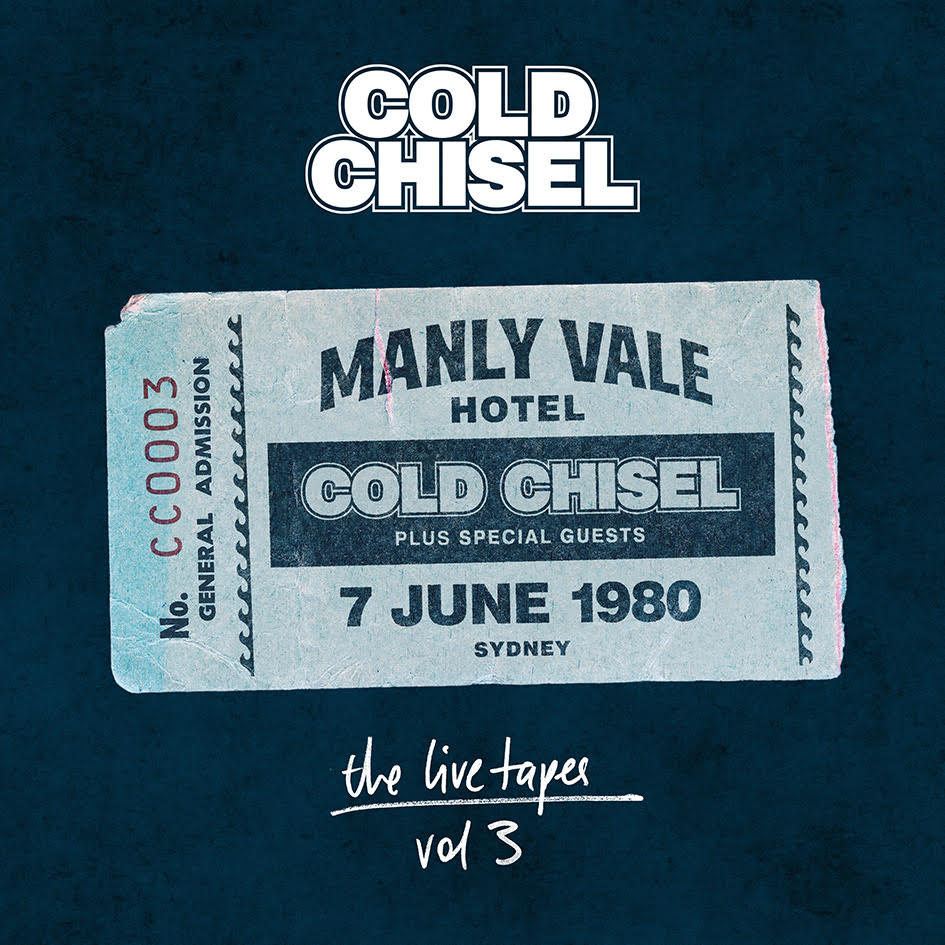 The Live Tapes – Vol 3 – Live At The Manly Vale Hotel

“If you are still in doubt as to who is king of the castle in the hard-nosed, uncompromising, no shit rock ‘n’ roll stakes, save your energies for the next time Cold Chisel Come to town … Without question, they lead the league of their own” – Vince Lovegrove, RAM, 1980. Vince Lovegrove knew a thing or two about rock & roll. Fuck, in the late ’60s he was in a band called The Valentines, with none other than Bon Scott. He would later go on to discover and manage that powder keg known as Divinyls. But here, in early 1980, he was writing a live review in Australia’s leading rock magazine about Cold Chisel. At the end of the review, Lovegrove wrote: “Recharge your batteries and get ready for when Chisel come back … this punter can’t wait for their first show back on the road.”

That “first show back” happened on Saturday, 7 June 1980 and is captured in all of its visceral glory on The Live Tapes – Vol 3 – Live At The Manly Vale Hotel which will be released on Friday, 2 December this year as a Vinyl LP, a CD, a very limited edition CD/DVD and it will be available as a digital download and exclusively on premium streaming services.. This release is the third in an ongoing series of special live recordings unearthed from Cold Chisel’s own archives.

The Manly Vale show was recorded the same week that the band’s ground-breaking third album East was released. East would go on to dominate the charts for the rest of 1980 and set a new high for Australian music. With amazing foresight, the band recorded the cramped, sweaty pub show on 2-inch 16-track tape and the original audio tapes have been found, baked and carefully prepared so that Kevin Shirley could mix them in June this year. They also filmed the show, but only the second film reel (featuring the second half of the show) could be found. Despite months of archaeological digging, the first reel seems to have been lost forever.

The Live Tapes – Vol 3 – Live At The Manly Vale Hotel reveals a fierce, lean band; whip-smart and confident from 5 years of relentless touring but who were still hungry and risk-taking, previewing ten of East’s twelve songs in the twenty-one song set. In addition to songs like Cheap Wine, Choirgirl, My Baby, Rising Sun and Star Hotel that would all go on to become massive radio songs and a huge part of Cold Chisel’s cannon, the set also featured Khe Sanh, Breakfast at Sweethearts, Conversations and a speed-fuelled One Long Day from the band’s first two albums that were already well on their way to becoming Australian classics.

“In 1980, we were playing 8 days a week. We were fighting fit and hungry, playing every show like it was our last – and often it almost was,” laughs frontman Jimmy Barnes. “This show at the Manly Vale Hotel was recorded the week EAST came out. We were still playing pubs, with the audience spilling onto the stage and the band spilling into the audience. It was fierce and fiery and lots of fun. Everyone in the band was writing songs and playing at the top of their game. It’s all here in the this raw and real recording.”

The set also features two great covers, an adrenaline-charged rendition of the ’60s nugget Shakin All Over – a brilliant one-hit-wonder for Johnny Kidd & The Pirates in 1960 which was made even more famous in Australia when Normie Rowe took it to #1 in September 1965. Although Cold Chisel occasionally covered this gem in ’79 and ’80, a recording of the song has never surfaced till now. Additionally, the band deliver an emotional take on the Bob Dylan classic Knockin’ on Heaven’s Door, which they offer as a tribute to two close friends and roadies who had recently died in a truck accident.

In reviewing the earlier show in RAM, Vince Lovegrove wrote: “Slowly but surely, this band has built … and built … and built … Believe me, if this particular Saturday night’s performance is even the slightest shimmer of insight, next time they hit the road, we’re going to see a world class act that’ll blow any other rock ‘n’ roll outfit off the stage.” A few months later, that’s exactly what happened … and what is captured on The Live Tapes – Vol 3 – Live At The Manly Vale Hotel.

The Live Tapes – Vol 3 – Live at The Manly Vale Hotel

2011 ‘All For You – The Best of Cold Chisel’ album has never fallen out of the ARIA Top 100 Album Chart (223 weeks so far). Officially Double Platinum

2012 ‘No Plans’ album debuted at #1 on ARIA Top 100 Australian Albums Chart. It was immediately certified Gold

2015 May: The band sells 20,000 tickets within minutes to their ‘Last Stand of Sydney’s entertainment centre’ shows. To mark the closure of this iconic venue Cold Chisel end up playing 3 shows in the venues final week and close it on a high.

2015 October-December: Cold Chisel play to 165,000 across Australia and New Zealand, playing major venues for one special night only. On this tour, the band become the first Australian band to headline the iconic Hanging Rock in Victoria, playing to a massive crowd of 18,500.
2016 April: At the 2016 APRA Awards, Cold Chisel are honoured with the prestigious Ted Albert Award for Outstanding Services to Australian Music.