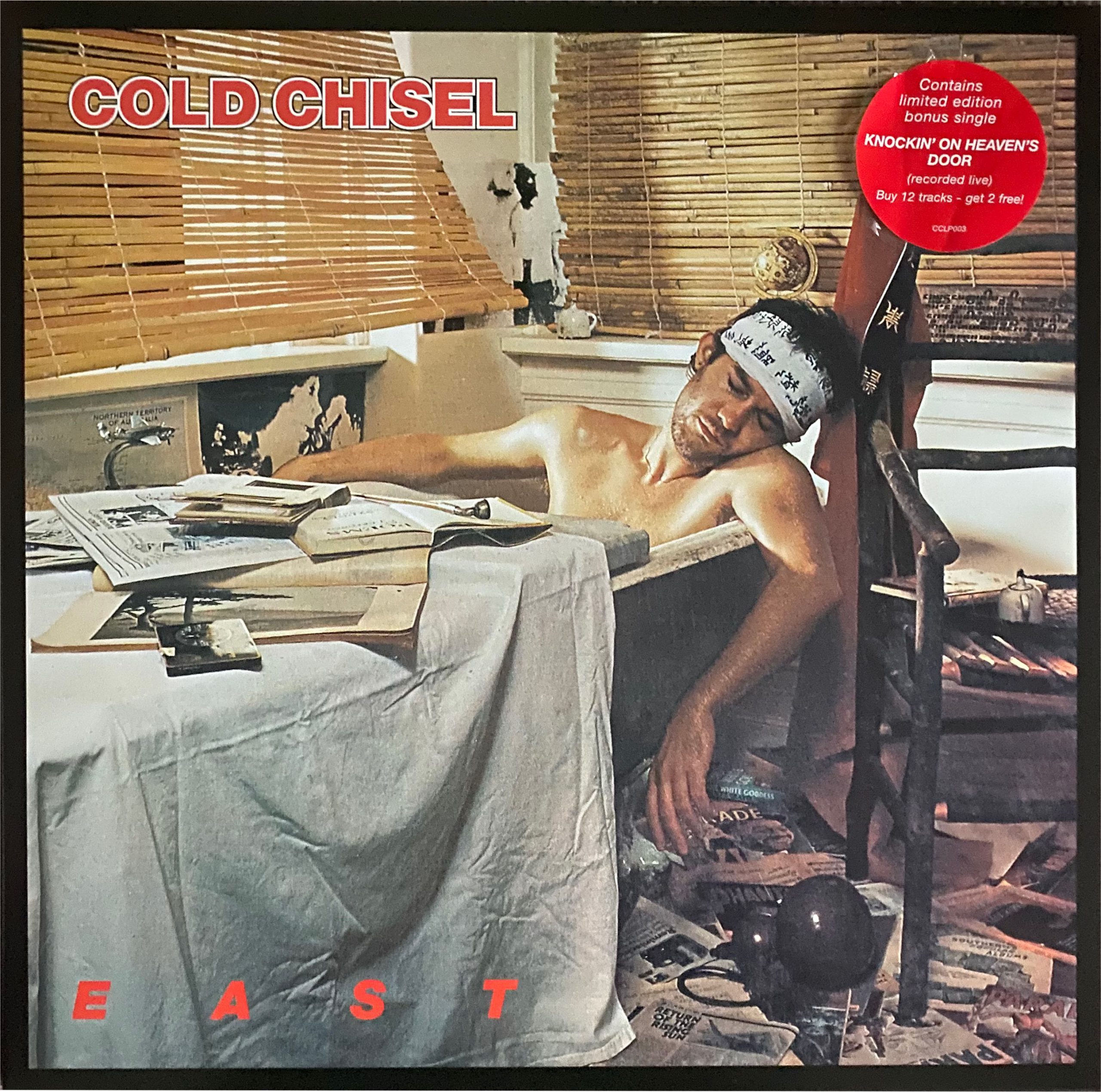 East is 40 years old… it’s now something like 9 x platinum (it’s hard to tell, it sold across two different record companies; 6 or 7 different formats; before they starting keeping proper records of sales)… it spawned the most incredible songs: ‘cheap wine’, ‘rising sun’, ‘choirgirl’, ‘my baby’, ‘four walls’, ‘never before’, ‘star hotel’, ‘ita’, ‘standing on the outside’… it featured songwriting contributions from each band member… cold chisel won almost every single ‘countdown’ music award – and received none of them :)… it’s the stuff of hard won legend… on may 29, the vinyl album is being re-released to commemorate this 40 year milestone, along with the 7″ inch vinyl single featuring a great live cover of bob dylan’s ‘knockin’ on heaven’s door’ with rare gem, ‘the party’s over’, one of don’s earliest songs…there’s 1,000 copies only.

East is legend. And that is fact. Released on June 2, 1980, Cold Chisel’s third album was immediate startime: gold in a week, double platinum in three months, resident in the Top Ten for half a year. It was the kind of overnight success best appreciated by a band that had formed seven years earlier in Adelaide and taken the hard road to rock justice, via low bread, cramped-van rides and wartime pub gigs.

There were also the cloth ears and cold shoulders they had known, at radio and in the record-label executive suites, and the early records that came close, but not close enough, to the group’s proven rage on stage. Cold Chisel, the 1978 debut, and Breakfast at Sweethearts, the gold ’79 followup, had the right stuff in parts, at times in spades: pianist Don Walker’s literate cutting stories, set in true lives and local geography; Jimmy Barnes’ lacerated Scot’s-wolf howl; Ian Moss’ slashing Fender jangle and stilleto-note breaks; the R&B-railroad charge of bassist Phil Small and drummer Steve Prestwich.

But East – mostly recorded in March and April of 1980, co-produced by the band with engineer Mark Opitz – was Cold Chisel in full boom: all of the above, delivered with indivisible force by a band at the first true peak of its powers. The have-not’s outrage of the opening salvo, “Standing on the Outside”; the terror laced with tenderness in ‘Choirgirl”; the rough-soul portrait of a young girl forced to grow up too fast; the power- chord mayhem and rolling Who-ish thunder of “Star Hotel,” the high-speed shotgun serving of sexual despair and imperialist economics in Barnes’ rockabilly gem “Rising Sun.” This was rock & roll classicism – the lessons and challenges of Jerry Lee Lewis, Stax/Volt singles, the early Rolling Stones and the electric Bob Dylan – imprinted with Australian verve and nerve, as taut and tough as AC/DC’s pirate swagger.

There were axes to grind too. Midnight Oil, then blowing up Sydney’s North Beaches, were working on a fusion of rock might and the evening news. Cold Chisel went right to the people inside the headlines, folks hammered by current events and the upper crust. “They hold the power, I hold the blame,” Walker wrote – and Barnes sang, with vivid ire – in “Tomorrow”; also a song about how love can conquer all, at least for a night. “Star Hotel” was a riot in fact and impact, composed by Walker after the September ’79 street battle between kids and cops at the Newcastle pub. “An uncontrolled Youth in Asia/Gonna make those fools understand,” Barnes wailed, heightening the danger and revolt in Walker’s pun against Moss’ slicing chords and Small and Prestwich’s precise brawling.

The clampdown, of course, followed. Walker’s jailhouse letter “Four Walls” was based on another fracas, a 1974 prisoner uprising at Bathurst Gaol, written from the perspective of an inmate living with the payback: “I love to march while some Nazi calls the time/Who’d wanna go home?” Barnes, Glasgow-born and the son of a boxer, bit into those lines like a guy who knew, someday, he’d get that turnkey on open, even ground.

East was made by a great live pub band in meticulous studio fashion. The polish was impressive. So were the neatly etched details in the gleam and reverb, like the way Barnes’ vocal and Moss’ guitar hit and hold the same high note in”Standing on the Outside” (“And I know!”) and the dark allure of Moss’s own cracked-glass croon in his song “Never Before,” over the engine room’s Jamaica-via-Adelaide bounce. In Prestwich’s “Best Kept Lies,” Walker punctuated the loping gait with organ jabs, like the Doors’ Ray Manzarek keeping time at a Bob Marley session. Small’s “My Baby”; was pure pop pleasure, sung by Moss with husky swinging affection…

East never sounded merely skillful, or compromised, only right – an articulated fury that caught the national psyche… For Australians, East is a cornerstone of rock history and the national identity.